The Joys of P.G. Wodehouse (and Happy Belated Birthday!) 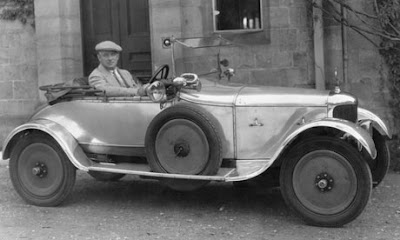 The man himself (1928)
This past Saturday was the 130th birthday of Sir Pelham Grenville Wodehouse, British writer and humourist.  (Doesn't he have a spiffy name?!)  Since I also finished reading his text Full Moon just days ago, I thought this would be the perfect time to highlight his work and why I count him among my favourite novelists.
Stephen Fry said of P.G. Wodehouse's writings, 'You don't analyse such sunlit perfection, you just bask in its warmth and splendour.'  I think sunlit perfection is an apt description of his novels.  When I'm feeling down in the dumps, when things aren't going the way I'd like them to, I can always count on Wodehouse to brighten my day.  He never fails to make me laugh.  Never.  Strangers have remarked on the giggles I can't suppress when I read a little Wodehouse on planes and buses.  He's that funny.
Most of Wodehouse's works are farces that center around the British aristocracy.  Lovers cruelly separated by meddling relatives, disguises, impersonations and epic misunderstandings are abundant within his pages.  Witty observations and snappy dialogue permeate the prose.  He's most remembered today for his Jeeves and Blandings Castle stories.  I have yet to read a Jeeves novel, because (as good as I'm sure they are) I. Can't. Tear. Myself. Away. from the world of Blandings.  At this fictional castle you will find Clarence, the Earl of Emsworth.  He is besotted with his Berkshire pig, the Empress of Blandings.  She has the distinct honour, if I'm not mistaken, of earning the silver medal in the Fat Pigs Class of the Shropshire Agricultural Show three years running.  Who could refrain from obsessing over such a swine? 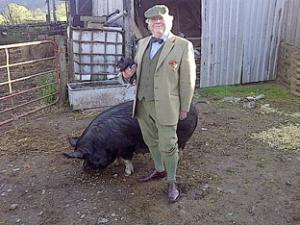 The Earl of Emsworth and his Empress
In short, I suggest you read a Blandings Castle novel immediately.  Hop to it!  Something Fresh is the genesis of the Blandings Saga, though I've found it's not crucial to read them in order of publication.  I'd like to conclude with a passage from the afore-mentioned Full Moon.  It's quite lengthy, however, so it shall appear after the jump.
In the following passage Freddie Threepwood, son of Clarence the Earl of Emsworth, has a simple request to make of his father. When Clarences plans on visiting a jewelry store in London, Freddie asks him to pick up his wife's necklace (which has just been cleaned) and send it to her in Paris.  Meanwhile, a pendant for his cousin Veronica's birthday is paid for and awaiting transportation back to Blandings.  Alas, this is rather too complex for a man whose intellect, we are told, is comparable to that of a jellyfish:
'It's quite simple.' [said Freddie]  'On the one hand, the necklace, on the other, the pendant.  Tell them to send the necklace to Aggie at the Ritz Hotel, Paris--'
'Who, asked Lord Emsworth, mildly interested, 'is Aggie?'
'Come, come, Guv'nor.  This is not the old form.  My wife.'
'I thought your wife's name was Frances.'
'Well, it isn't.  It's Niagara.'
'What a peculiar name.'
'Her parents spent their honeymoon at the Niagara Falls Hotel.'
'Niagara is a town in America, is it not?'
'Not so much a town as a rather heavy downpour.'
'A town, I always understood.'
'You were misled by your advisers, Guv'nor.  But do you mind if we get back to the res.  Time presses.  Tell these Aspinall birds to mail the necklace to Aggie at the Ritz Hotel, Paris, and bring back the pendant with you.  Have no fear that you will be left holding the baby--'
Again Lord Emsworth was interested.  This was the first he had heard of this.
'Have you a baby?  Is it a boy?  How old is he?  What do you call him?  Is he at all like you?' he asked, with a sudden pang of pity for the unfortunate suckling.
'I was speaking figuratively, Guv'nor,' said Freddie patiently.  When I said, "Have no fear that you will be left holding the baby," I meant, "Entertain no alarm lest they may shove the bill off on you."  The score is all paid up.  Have you got it straight?'
'Certainly.'
'Let me hear the story in your own words.'
'There is a necklace and a pendant--'
'Don't go getting them mixed.'
'I never get anything mixed.  You wish me to have the pendant sent to your wife and to bring back--'
'No, no, the other way round.'
'Or, rather, as I was just about to say, the other way round.  Tell me,' said Lord Emsworth, returning to the subject which really interested him, 'why is Frances nicknamed Niagara?'
'Her name isn't Frances, and she isn't.'
'Isn't what?'
'Nicknamed Niagara.'
'You told me she was.  Has she taken the baby to Paris with her?'
Freddie produced a light blue handkerchief from his sleeve and passed it over his forehead.
'Look here, Guv'nor, do you mind if we call the whole thing off?  Not the necklace and pendant sequence, but all this stuff about Frances and babies--'
'I like the name Frances.'
'Me, too.  Music to the ears.  But shall we just let it go, just forget all about it?  We shall both feel easier and happier.'
Lord Emsworth uttered a pleased exclamation.
'Chicago!'
'Eh?'
'Not Niagara.  Chicago.  This is the town I was thinking of.  There is a town in America called Chicago.'
'There was when I left.  Well, has anything been happening around here lately?' asked Freddie, determined that the subject should be changed before his progenitor started asking why he had had the baby christened Indianapolis. 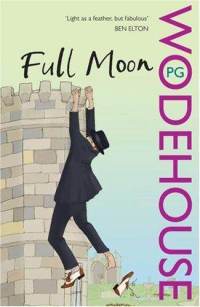 There you have it, my friends.  A glimpse of P.G. Wodehouse via pp. 130-132 of Full Moon (the Arrow Books edition).  I hope you enjoyed it as much as I did, for the mere act of typing the above passage induced multiple chuckles.  And Happy Birthday, old chap!
P.S.  The photo of the Earl of Emsworth and the Empress is taken from a current theatrical adaptation of the Blandings characters, playing in northern England.  Oh, how I wish I were there to see it!
Posted by Diana at 2:47 PM

I'm becoming a serial commenter. I beg your forgiveness. P.G. Wodehouse. How did I miss this gem? I've heard his name, but I admit I've never so much as basked in a single line of his warmth. I'll hop to it!

Please Do become a serial commenter. Your remarks are so witty!

But I'm a bit worried. How could I have failed to tell you about Wodehouse? I thought I had, but obviously I didn't. I'm a horrible, horrible friend *slaps wrist*. I have a couple you could borrow if you'd like.