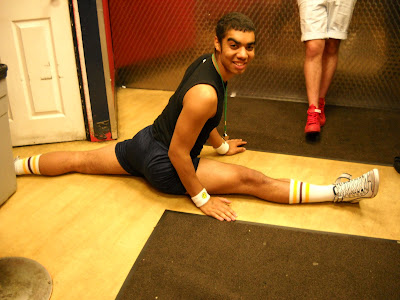 ...Of some of the strange sights one witnesses in my neck of the woods.  (I don't live in the woods; it's just an expression.)  After a night out, a few friends and I stopped for some cheesy chips before making our way home where this dude and his friend quite loudly tried to guess which state we were from.  I should have ignored them like others of my party so wisely did, but I couldn't help but pipe up after hearing some of their hypotheses.  Do I sound like I am from Brooklyn or Texas?  One thing led to another, and before I knew it flexibility was being exhibited at a takeaway in the wee hours of the morn.

However, this still doesn't top the time a group of inebriated guys thought it would be a good idea to drop their pants while standing at the top of the steps leading to the university's main building and sing at the top of their lungs.  I so wish I had been able to snap a pic of that incident; not because I'm a creep (and anyway, I was too far away to see much), but because I feel the occurrence was so ridiculous people won't believe me when I relate it.  You do believe me, don't you?
Posted by Diana at 6:19 PM 6 comments

As of late, my humans have made mention of a phenomenon they refer to as Skype.  Now and again, I find myself hauled up to the study where all the humans in my family gather round a moving screen. The most astonishing thing then occurs: I suddenly hear the voice of my mother emanating from its general direction.  She calls to me in her most pathetic tones and inquires if I am 'being a good boy'.  Humph!  Am I ever less than a gentleman?  However, if she believes I will condescend to respond to her exclamations after heartlessly forsaking me, she is sorely mistaken.  Am I wrong, dear reader, in feeling slighted by this abandonment?  I cannot believe that I am.  Therefore, I shall continue to toss my head from side to side and feign deafness. 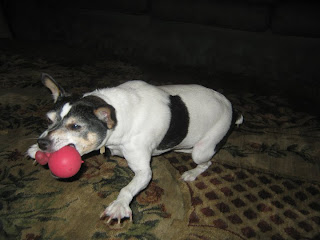 Attacking his beloved toy: The Cuz
Photo by Chelsea
A note from the puppy parent:
I am currently reading Virginia Woolf's semi-fictional, semi-biographical narrative of Elizabeth Barrett Browning and her dog for my dissertation.  Flush: A Biography (1933) is proving to be an enchanting tale as Woolf imaginatively conjures up the spaniel's perspective.  The following scene in which Elizabeth and Flush meet each other for the first time was, for me, particularly poignant:
'Oh, Flush!' said Miss Barrett.  For the first time she look him in the face.  For the first time Flush looked at the lady lying on the sofa.
Each was surprised.  Heavy curls hung down on either side of Miss Barrett's face; large bright eyes shone out; a large mouth smiled.  Heavy ears hung down on either side of Flush's face; his eyes, too, were large and bright: his mouth was wide.  There was a likeness between them.  As they gazed at each other each felt: Here am I -- and then each felt: But how different!  Hers was the pale worn face of an invalid, cut off from air, light, freedom.  His was the warm ruddy face of a young animal; instinct with health and energy.  Broken asunder, yet made in the same mould, could it be that each completed what was dormant in the other?  She might have been -- all that; and he -- But no.  Between them lay the widest gulf that can separate one being from another.  She spoke.  He was dumb.  She was woman; he was dog.  Thus closely united, thus immensely divided, they gazed at each other.  Then with one bound Flush sprang on to the sofa and laid himself where he was to lie for ever after -- on the rug at Miss Barrett's feet. 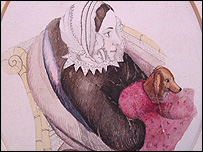 Barrett Browning and Flush
Image via Google
I blubbered like a baby when I read this passage in the library.  I, too, was an invalid when Percy entered my life as a wee pup; and his company was medicinal.  Like Elizabeth and Flush, my mum maintains that he and I look alike.  One thing that astounds me about animals is the way in which, despite the communication barrier of which Woolf writes, they manage to make themselves heard.  Percy and I have certainly found a way to understand one another -- even if I speak, and he is dumb.  Except...Percy is not dumb.  He barks and growls to high heaven!  I feel quite lucky to know that he is being pampered and well cared for by my parents while I work towards my graduate degree.  But I sure do miss him. 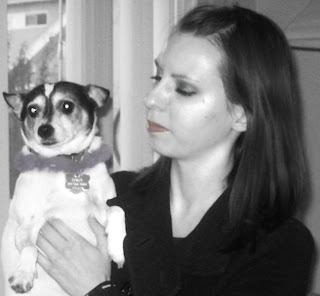 'She was woman; he was dog.'
Another great photo by Chelsea
Posted by Diana at 4:48 PM 4 comments

...For my prolonged absence from cyberspace.  I have been here: 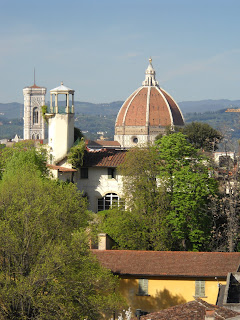 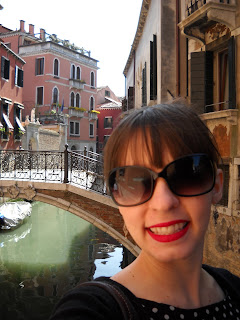 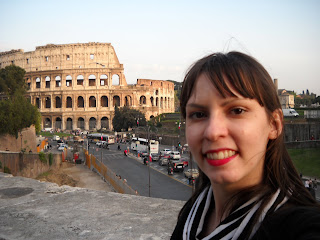 This would be the library,
where I toiled away on my essays.
Now that my second semester papers have been submitted, and I only have the dreaded D-word (dissertation) to occupy my academic time, I am resolved post more on this humble little blog.  However, I am sure I will manage to squeeze in a few summer adventures between study days at the library.  I'm good at procrastinating like that!
Posted by Diana at 7:37 PM 5 comments