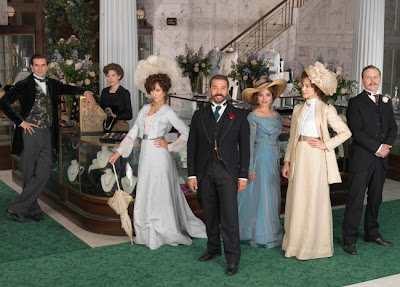 Since the tragic decline of Downton Abbey (oh, what a waste!), there's hasn't been much in the way of period drama to attract my attention. Recent adaptations of Ford Madox Ford's Parade's End and Emile Zola's The Ladies' Paradise still haven't made their way to my side of the pond, nor has the second series of the poignant Call the Midwife. I've been feeling the lack of new material keenly.

Fortunately, the compelling Mr. Selfridge recently began broadcasting to American audiences. I've only watched the first four hours (all that's currently available), but thus far it's quite engaging and provides a sorely needed dose of period drama. Recounting the rise of Harry Gordon Selfridge's London department store and how it transformed the shopping experience, the series follows the socialiite world into which Mr. Selfridge attempts to ingratiate himself and the lower-middle-class workers under his employ.

Jeremy Piven does a wonderful job portraying the nuances of a man who is both charismatic and deeply flawed, but already I'm deeply invested in the narrative arcs of many female characters. Agnes Towler (Aisling Loftus), an accessories assistant who attempts to rise above the difficulties presented by a troubled family life, is an especial favourite. So is Lady Mae (Katherine Kelly), a former actress who now oversees London society with her masterful powers of manipulation. Ultimately, I'm most intrigued by the series' respresentation of women who negotiate (subtly or forcefully) for empowerment in a world that couldn't offer evolved gender roles quickly enough.

The discussion of clothing, accessories and design are also a real treat to a viewer who craves immersion in Edwardian England. These little details alone make the show worth watching! 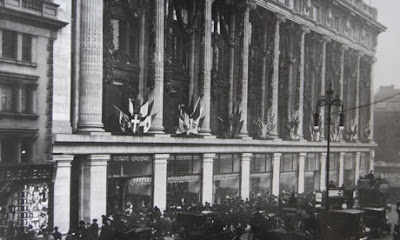 Selfridge's, Oxford Street, on its opening day in 1909

Email ThisBlogThis!Share to TwitterShare to FacebookShare to Pinterest
Labels: Film and TV, Photography

I haven't watched it yet, but I have all the episodes recorded! I just need to find time to sit down and watch them!

Let me know what you think when you watch it. At this point, I'm completely engrossed.